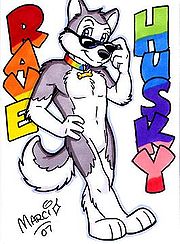 RaveHusky is originally from Trondheim, Norway, and speaks both Norwegian and English fluently. He is also member of the FloridaFurs. 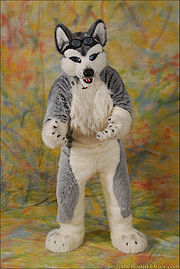 RaveHusky has a fursuit that was constructed by ScribbleFox, and which debuted at Megaplex 2008. He was usually seen wearing underwear adorned with love-hearts, and appeared as a "subservient" on episode 394 (November 2, 2008) of the Funday PawPet Show.[1][2] This suit is now retired.

A new fursuit, constructed by Latin Vixen, officially took on the 'Huskers' name and debuted at Further Confusion 2011. He will continue to wear the hearty underwear.

RaveHusky has a close connection to his Husky spirit, and a strong bond with nature. Sometimes RaveHusky wishes he could, through transformation, unleash his husky spirit from his human form and always be a husky.

The Huskers fursuit has attended:

RaveHusky has an account on Second Life, as RaveHusky Yifu. He is on the game only a few times a week but is always up for a chat if seen online.

In real life RaveHusky works as a Ramp Agent for a major airline in the U.S.

RaveHusky's interests range from computers to commercial aviation. He loves to play computer games whenever he has the time to do so. Another thing RaveHusky loves is to follow up on airline information and news; he also loves flying.

RaveHusky's ultimate goal/wish would be to be able to wear his fursuit during a regular commercial flight, although highly doubts it will happen. He also has an interest in technological advances in general.