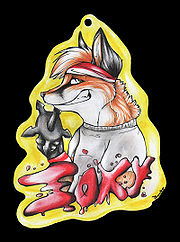 HungaryFox (real name Chris L., born 1991 in Pécs, Hungary), is a Hungarian anthro artist who lives in a small town west from Pécs.

HungaryFox's art gained activity in 2005, the same time he founded the club "DaFoxLove" on deviantART which became the most visited fox fan club on the aforementioned site.[clarify][citation needed] His connection to the Hungarian furry community began somewhat later in 2006. The first Hungarian furmeet he attended was in 2007, but only since 2008 does he count himself a real active and productive member of the local community.

In the Summer of 2008, with the aid of his friend Lycangel, HungaryFox managed to mix his previous artistic style with a newly learned drawing technique, thereby taking his skill to a higher level. His artwork mostly consists of clear-lined anthropomorphic manga chibi characters.