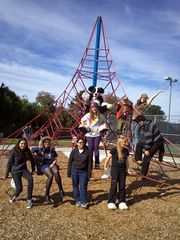 Humboldt Furs, aka HumFurs is a California furry group in Northern California. The group is mainly centered in Eureka and Arcata, CA, but has several active members from the surrounding towns as well. There are currently over 60 members in the facebook group and we try to have a furmeet at least every month.

Humfurs was originally was started and run by Dreamous in 2007. However he is no longer an active member nor is he running the group anymore. The livejournal page which Dreamous started has been inactive since 2010. An old Furaffinity page, user Humfurs is inactive, but Humboldt Furs is newer. The group now has an active facebook group, and the person now running the meets and moderating the facebook group page is Tokala Fox.