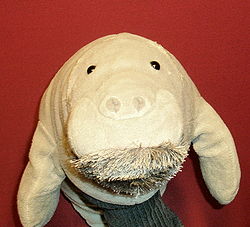 Hughbert Nicolas Manatee, or Hugh Manatee is a supporting character on the Funday PawPet Show.

Hugh is voiced by JR, the puppeteer of one of the show's resident ferrets, Poink T. Ferret. Hugh is known for his squeaky voice, naive demeanor and infatuation with Fudgie the Whale, Chicken In A Biscuit crackers and Jimmy Buffett. It is unknown if Hugh is a child or an old man, but statements from the sea cow such as "pulled a hammy" and "dropped my coinpurse" seem to indicate the latter. He moos a lot, often replacing song lyrics with mooing, and likes to swish his flippers back and forth rapidly, which he calls "flippering."

By his own admission, if you view Hugh from the back, he looks like half a buttcheek. On one show, Hugh appeared with a boat propeller lodged in his head. Hugh is one of the few puppets in use on the show that was not made by Folkmanis.

Hugh has a penchant for being naive and gullible; he has appeared wearing a toupee, a Prince Albert tattoo on his flipper, and most recently, wearing makeup similar to Heath Ledger's Joker portrayal from "The Dark Knight." This last one was also partially an attempt to retire the previous manatee puppet for a new one since the original was starting to show some wear; but audience reaction to some differences in appearance prompted keeping the original until a suitable replacement can be obtained.