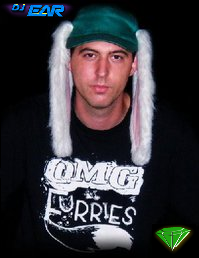 Huepow00 (DJ EAR) aka BunBun (born 1987) is a musician (DJ/Artist) living in Orange County, California, USA. He is an organizer for the Los Angeles convention Antheria.

For over a decade EAR has pushed the harder sounds of dance music - blending elements from various genres into an uplifting, upbeat atmosphere. Inspired by artists such as Cranky, Gammer, and Hideki Naganuma - EAR weaves a melody of bouncy basslines with an oldschool sound.
With over 20 years producing music, EAR believes the secret to loving what you do is to never give up on your craft, and to always keep an open mind.

EAR - "The Madness" at OCRemix

A comedy Lets-Play series by 2, The Ranting Gryphon & EAR.