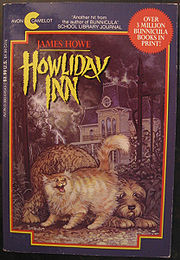 Howliday Inn is a fiction book by James Howe, and the sequel to Bunnicula: A Rabbit-Tale of Mystery. The Story Is about when Harold and Chester are sent to Chateau Bow-Wow for a week while the Monroe go on a vacation. almost immediately they are drawn into a horrifying twist of events when Louise, a French poodle, who is involved in a rather messy love-triangle with Max, (a Bulldog with a white sweater) and Georgette, (another poodle) disappears from the cage. As Chester and Harold unravel the mystery of how Louise disappeared stranger events happen around both animals as they track down the shocking answer.

Howliday Inn, illustrated by Lynn Munsinger, was first published in 1982 by Atheneum Publishers.[1] It has been republished, and followed by other Bunnicula series.