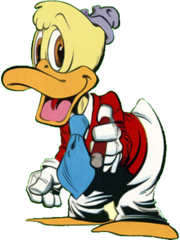 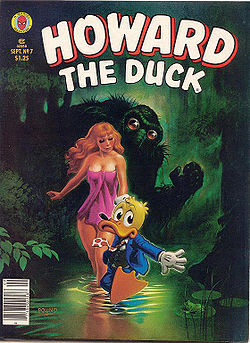 Howard the Duck is a cult classic Marvel Comics comic book character created by Steve Gerber in 1973 and star of several comic book series of the same name about the misadventures of an ill-tempered anthropomorphic duck from a funny animal version of Earth now trapped on our Earth. Howard generally wears a tie and shirt, and is almost always found smoking a cigar. Like many cartoon ducks, he originally wore no pants until Disney threatened legal action due to Howard's resemblance to Donald Duck. While the comic book depicts anthropomorphism, it is not a furry comic.

Howard's adventures are generally parodies of science fiction and fantasy, written in a tongue-in-cheek style and combined with a degree of metafictional awareness of the limitations of the medium, often very experimental for a non-underground comic.

Howard's first appearance was in the comic book Adventure into Fear #19, as a secondary character to the Man-Thing story. He would return in Giant-Size Man-Thing and eventually earn his own comic book title in 1976. A newspaper strip was attempted from 1977 to 1978, but failed to gain any popularity.

Howard's plug was pulled in 1978 when Gerber, who had gained a degree of creative autonomy, clashed over issues of creative control, and Gerber was abruptly removed from the series. Howard would return briefly in 1979 and 2001 in short-lived runs that lasted only a few issues each and was last seen in Civil War: Choosing Sides #1 (Feb. 2006).

In 1986, a feature film was created, produced by George Lucas and starring Lea Thompson, Jeffrey Jones, Tim Robbins, and Chip Zien as the voice of Howard. Howard himself was portrayed by an assortment of stunt actors in a duck suit. The only characters brought over from the comics were Howard and his sidekick/girlfriend Beverly Switzler, played by Lea Thompson. The film was widely panned and was a box office bomb, winning the 1987 Razzie Awards for Worst New Star, Worst Picture, Worst Screenplay and Worst Visual Effects. This caused George Lucas who was heavily in debt at the time to sell to Steve Jobs, the CEO of Apple Computer, Lucasfilm's newly-launched CGI animation division for a price well above market value. That division eventually become Pixar Animation Studios.

For more on the film version, including clips, sounds, original games (even a 'sequel trailer!) visit http://www.geocities.com/cecinid/HowardIntro.html