How To Be a Furry

From WikiFur, the furry encyclopedia.
(Redirected from How To Be A Furry)
Jump to: navigation, search 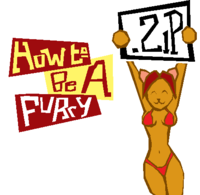 The original cover image to How To Be a Furry, which was only available by download initially on deviantART.

How To Be a Furry, created in March 2006 by artist Jonn Wood, is a satirical multimedia article about the furry fandom, currently hosted online primarily on Crush! Yiff! Destroy!.

The article, intending to explain the many intricacies of the furry fandom to an otherwise uninitiated (but interested) subject, ends up lampooning much of the fandom through several subjects, including fursonas, role-playing, furotica, and many of the stereotypes of the furry fandom.

In spite of the article's tone, there is useful information for new members of the fandom to glean from it, such as an idea of stereotyped traits and behaviors to avoid, as well as a list of locations where other furs are likely to be found.

Much of the article focuses on creating your own fursona and representing that fursona throughout the fandom.

Hermaphrodites are a running gag in the article, mentioned often due to their popularity within the furry fandom and Yiff.

A general introduction to the fandom (and some of its downsides)

An extensive but tongue-in-cheek guide to creating your own fursona (however outrageous it may be). Includes species selection guides (based on sexuality and gender identity), color schemes, clothing, and other notable details.

One of the more scathing sections, detailing several stereotypical personalities in the furry fandom, including "wanky artists'," "closet furs," and the "oppressed."

Another controversial section, detailing how to perform several "drama-inducing techniques" such as creating unusual fetishes, stealing art, and "leaving the fandom forever".

A look at how to draw, write, and role-play your fursona for maximum "effect." Includes a list of handy euphemisms for genitalia.