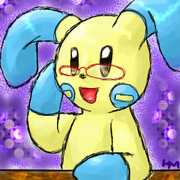 She has been an artist at a very young age, but she did not get serious about it until during the early times she attended high school. She has also since then, been into anime/manga art. Her early endeavors where of Sailor Moon and Pokémon, along with other animes of the late 1990s and early 2000s. She did not get into the furry fandom until she came across various kemono and other fur-based sites such as AGNPH, which she became a member of. After then she started drawing furry art more often, and mostly Pokémon-based fanart.

Nowadays, she still draws Pokémon. She is also hoping to work on more original creations on the side.

Minun is currently located in Metairie, Louisiana, USA. She is also attending college in Baton Rouge and is a biological sciences major. Minun had attended Anthrocon 2010.[1]