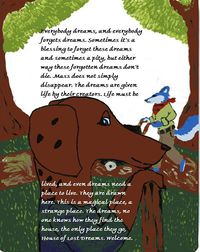 House of Lost Dreams is a multi-panel concept comic exploring the idea that dreams don't just fade when forgotten but rather are masses that cannot be erased or simply displaced. Dreams and nightmares are drawn to the house for currently unknown reasons. The house is kept by a dachshund named Adelaide Le Reaux with the help of an illegal coyote worker named Carlos Garcia.

The comic appears to be set someone where in the southeastern United States but no specifc state or address has been given. The House itself appears in the middle of a forest and/or swamp that seems to have a mystical air about it. How people actually find the House is unknown, but people come to the House to claim a dream of their own and hopefully prosper. However, all too often people claim a nightmare.

Although still in its fledgling days, the comic has the potential to touch on very serious issues due to its air of unreality.

House of Lost Dreams was created by Ellie Dachshi and is displayed on furaffinity.com