House of LSD is an adult webcomic created by J3T. 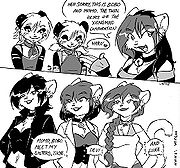 From 2002-2007 it was co-written(uncredited) by Stickdevil, who contributed many of the characters' personality quirks and storylines as well as guest strips while J3T was too busy with school. The partnership ended when J3T ended their 5 year relationship. Updates ended on this version on January of 2007.

As of April 2009, the site was cleared to make way for a new comic by the same name. All of the old strips were deleted[1] and the site redesigned. Later, users were able to recover an archive of the old series[2].

A placeholder image was placed on 9 April, and updates resumed on 13 April. Though the major cast (Luna, Skye, Devi, and Raquel) and overall concept have been preserved, this version does not follow the plot of the first version, instead taking place before the first, and most likely in its own independent time line.

Unlike the original run, J3T has stated that this new run will be less explicitly sexual, focusing instead on the characters themselves, though some nudity will still be involved.