Formed in late 2003 and early 2004, Hotfurs was created and shaped by its founders to suit its subscribers needs for both content and security. At the time of its creation, it was the third furry artwork subscription site in existence (After Sexyfur.com and Vixine.com). The site offers various different types of memberships, and provides its contributors with various means of advertising and/or contact networking. 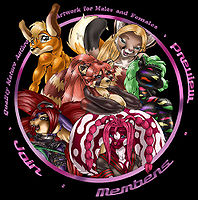 Hotfurs has over 100 original characters, but among them has risen a few favorites within the site: