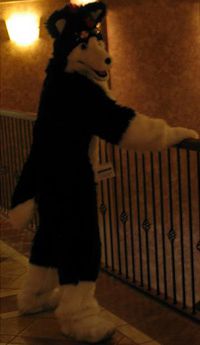 Horlequism at What The Fur 2011

Horlequism having a drink at Ben Wolvenhour's Place After AtomicLolipop in 2014. One of two times they were known to have actually interacted.

Horlequism knew of the fandom for many years and dabbled here and there, but never really got into it until becoming a serious follower in 2009. He was a fixture in the Toronto furry community and could be found at many a furmeet chasing his bwrall. His untimely death left the community poorer for having lost him. (Bwrall refers to something he loved. For example; His Ball, His Lover, or His Drinks!)

His fursonas were an Alaskan black and white husky and a tiger named Zynth.

The fursuit depicting Horlequism's husky character was built by Frilled Lizard Studios (run by LizardToes), and debuted at Furnal Equinox 2011.

Zynth was built by Mechanical Laboratory (run by Mechasheep), and debuted at Anthrocon 2012.

[?-2015] Horlequism was the synth player in a Progressive-Rock band titled "KONG" that often performed in Toronto, Ontario. He was full of Passion, Talent, and Inspired many with his magical fingers. Not only was he a king of the Synthesizer, but he was also a Master at Bass Guitar, Electric Guitar, and not to mention Vocals. One of his few aliases in his musical journey was "Stockyard6" which he used to post his personal music to SoundCloud as well as ReverbNation. To date, even though he's passed on, he still creates damn fine music in the heavens, and through all of us who were driven by him.