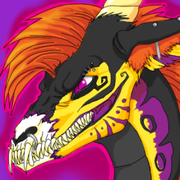 Luxari, aka Sorandra and Lougara (Hope Glass) (born 1985) currently resides in Patuxent River, Maryland and is an Aerographer's Mate (meteorologist in training) in the Navy. She has been in the furry fandom since 2002.

She is an amateur furry artist, her preferred mediums being Prismacolor markers and pencils, but she is also quickly learning the ropes in Photoshop CS. She loves doing art trades and gift art for friends. She has not been to any conventions, but is planning out a tarot card portfolio which she started in 2005, and intends to post it by September 2008.

She planned to attend AC 2007. She is also working on a piece of her and all of her friends in the fandom. She is an avid role player, has two years of experience playing Vampire: The Masquerade, and is currently constructing a character for and learning Werewolf: The Forsaken. She is currently playing a Defiler in the game Demon:the Fallen. Sorandra is a Kemetic pagan, meaning she worships Egyptian gods. She has been a pagan since she was 12. She is an amateur storm chaser, and loves filming severe weather, having chased three cumulonimbus clouds, two supercells (and having been chased by one tornado).

Luxari was originally known as Lougara, whose fursona originally was a hybrid of a golden tan jackal, Arabian and bone childe, a skeleton inhabited by the spirits of creatures who were killed unjustly or before their time. Her fursona is a hermaphrodite, and a polymorphic taur, which means shi can go from a quadrupedal to a bipedal form. Shi has jackal forelegs and horse hindlegs, a horse tail and bone wings. Hir head is that of a jackal.

Lougara was extremely symbolic of things and events in her life. 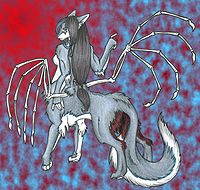 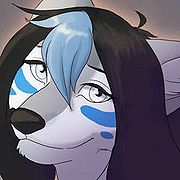 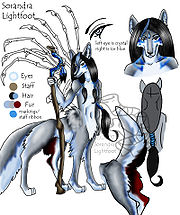 During a stressful and life turning chain of events, Lougara was replaced by the new totem spirit guide, Sorandra.

Sorandra is a Romanian wolf taur, who is female, but highly androgynous, often getting mistaken for a 'pretty male'. She is a Druid, and heterosexual. She is defensive and maternal and very monogamous. She is peaceful and merciful, and deeply loving, yet very cautious and trusts very few people. She has a close bond with Epsereth, and she cherishes her friendships more than anything.

Luxari is a hybrid of dragon and hellhound. She was 'born' in 1667, and 'died' in 1692, to be 'reborn' in 1985, from when she would eventually find herself uniting with Christine to play as her avatar and guiding spirit.

Luxari Del'eish'inae was a minion of sorts, first summoned in her feral form to serve and protect a young witch back in 1667, by the baby's mother. The group of witches revered the clan of hellhounds that Luxari came from, so Luxari was more than happy to protect the young witch, named Lilanatra. She guided and protected her young charge, even following her secretly to America.

25 years later, the witch hysteria began, and Lilanatra and her coven were targeted. One of the Magistrates found Lilanatra and Luxari when they were attempting to flee to the west. Luxari was bound with holy water and sacred text, helpless as the Magistrate slit her mistress' throat. Upon Lilanatra's death, Luxari seemed to die herself.

Her coven found their bodies, and buried Luxari in a cemetery, hoping to be able to come for her and revive her once things settled down. However, the entire coven was slaughtered, and Luxari remained buried for 293 years.

She awoke, thinking that only a few days had passed. She emerged from her grave, only to find things had drastically changed, and all she knew and loved was gone. She also found that her hands, the velvet off her horns and the front half of her face had rotted away. 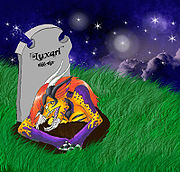 Luxari, emerging from her grave. Done by her creator

She stayed in her cemetery, sleeping in grave, for years, unsure why she had been brought back, unsure as to what her purpose was. in 2002 she felt a calling, and began searching for the single voice that rang out to her. She contorted into her anthropomorphic form and heeded the call of the confused voice that knew her name without realizing it knew her.

Finally, in 2007, Luxari found the caller- Christine Evans, who had been confused and befuddled by the plethora of avatars that sought her attention. It was unspoken, the instant bond between them, but it was steadfast and unbreakable. Luxari knew why she had been brought back- she had been brought back to guide another follower in the ways of the unseen path.

Luxari looks like an undead Kirin if you want to go into specifics, with a dragon like head, a long draconic tail, and digitigrade legs ending in cloven hooves. However, her feral form reveals her hellhound heritage, with disturbingly long canine hind legs and grotesque wings that are mapped with woven webbing. Her head is completely skull like and her vertebrae is plainly visible in her feral form.

Luxari's pattern is inspired by the patterns of Ravagers, a World of Warcraft beast.

Luxari has no genitals- she has breasts, but they have no nipples, and her groin is just a closed area. She does like to flirt with males, and torment them, but she has no sexuality whatsoever.

Her style of dress varies from formal steampunk, to formal Victorian Gothic or 1920's mobster. She prefers corsets and pinstriped jackets and pants with a fedora or beret. She also is very fond of wearing SS uniforms.

Luxari is also very interested in history, seeing as she missed almost 300 years of it. 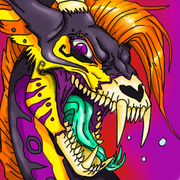 Luxari is generally easy going and mischievous, but her temper can be ferocious if she is pushed too far, usually she assumes feral form when pushed to the edge.

Luxari is single as of now, but she is greatly interested in a gryphon friend of hers.

Luxari plays World of Warcraft, and can be found on the Draka PVE server, playing a night elf hunter named Lougara. Her alts are a Night Elf druid named Ulcatambaro on the PVP server Thunderlord, and a level 9 Blood Elf warlock named Lougara on the PVE server Vek'Nilash.