Higher Than the Stars

From WikiFur, the furry encyclopedia.
Jump to: navigation, search
Culture > Music > Songs > Higher Than the Stars

The video follows a female protagonist who is handed a flyer, marked prominently with the word "PARTY" and a pawprint, by a young boy. She carries on with her daily routine, deciding later on to attend the festivities instead of spending the night alone. After preparing her outfit and makeup, she walks to the directions indicated on the flyer and comes to some storefront shutters, on which is posted the same flyer. The shutters then open to reveal The Pains of Being Pure at Heart and several fursuiters already in the midst of a party. Initially bewildered by the spectacle, she gradually becomes more acclimated to the atmosphere, becoming especially friendly with an orange raccoon/fox fursuiter (played by Foxwell) after sharing a drink with him. The video is interspersed with footage of the band performing; first by themselves, and later with all of the fursuiters dancing along. The video begins in monochrome (with the flyer appearing in orange) before transitioning into full colour as the shutter doors open.

A director's cut of the video has been released with some changes: Additional cuts are added making the overall video longer; The "black and white" opening reveal more details highlighted in color; and a revised ending shows the protagonist falling unconscious after partying and drinking with the fursuiters, only to wake up and find herself having become a fursuiter (portrayed by Clementine) herself. These changes are alleged to be in line with the video's original script. [1][2] 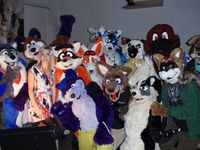 Fursuiters in the cast of the video, posing with the lead "human" actress. Photo by Yargo.

The fursuit involvement was organized by Jay Van Buren.[5] Participants were paid $50 each.[6]

For their part, lead singer Kip Berman commented the following:

"We recently shot a video with a lot of “furries” (or more politely, “fur suiters”) in it… it’s pretty funny, I think. Maybe not as exciting as female prisons or post-apocalyptic lord of the green screen fantasies, but for us — it’s a start."[7]

Peggy Wang, keyboardist and vocalist, confided the following to Arakum of Red Furros in a May 28, 2010 interview:

"I first discovered furries on an MTV show called "True Life: I'm a Furry." I became really fascinated with them. I'm sure there are varied motives behind the lifestyle, but I guess for me, being a shy and self-conscious person, I can definitely see the attraction in expressing yourself through a character. Also, I like cute stuff. Ha ha."[8]