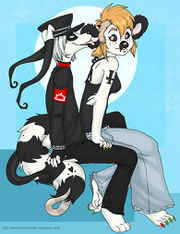 Hideki, also known as sixteenbit, Xenon, and Xorii (pronounced Hi-DEK-ee; born on September 18, 1988), is an anthro artist and furry gamer from the United States.

Hideki has a staggering amount of different of species and fursonas, but the most common are the gelert, a dog-like species of a Neopet and a moogle mix.

Hideki has been an avid gamer from a very young age. He has owned and played games on the NES, SNES, N64, PS1, Dreamcast, GameCube, PS2, XBox 360, and Wii (he still owns all of them except for the PS1, Dreamcast, and GameCube). Hideki has also previously had the GameBoy, GameBoy Color, GameBoy Advance, GameBoy Advance SP, Nintendo DS, DS Lite, and the original PSP (of those he only still owns the two DS and PSP). Some current console series that Hideki plays include Odin Sphere, Dark Cloud (1 and 2), Resident Evil (0, 4, and REmake), Paper Mario (1 and 2), and Final Fantasy (VI through X-2).

Another gaming platform he has used is PC gaming, which it became more prevalent as he got older. Presently he plays such PC titles as Morrowind, Oblivion, Day of Defeat: Source, Silent Hill (3 and 4), GMod, and STALKER. He frequents online games as well, like MapleStory and EverQuest II. Emulators are also a favorite, especially with SNES and PS1 games.

Although close to none of it is ever submitted anywhere, Hideki is a part-to-fulltime PC game modder. He works on private projects on several games including Enemy Territory, Jedi Academy, Counter-Strike: Source, and Morrowind.