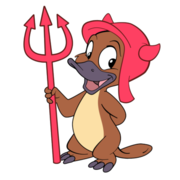 Hexley is the mascot of the open source operating system Darwin, which is the core of Mac OS X.

Hexley is a cartoon platypus that usually wears a cap which resembles a demon's horns, and carries a trident, similar to the BSD Daemon. Hexley was designed and copyrighted by Jon Hooper. Hexley is not affiliated with Apple Computer.

The name was a mistake; the mascot was originally supposed to be named after Thomas Henry Huxley, a 19th century English biologist who was a well-known champion of Charles Darwin's theory of evolution (he was nicknamed "Darwin's bulldog"); however, ignorance[clarify] led not only to a mistake in Huxley's name but also to a limited understanding of who he was. (The developers apparently thought he was simply Darwin's assistant, when in fact he was a prominent biologist in his own right.) By the time the mistake had been discovered, however, it was deemed too late to change and the incorrect name "Hexley" was kept.[1]

Hexley is one of the playable characters in Super Tux Kart.[2]