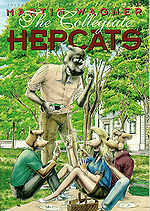 Hepcats was a comic self-published in the 1990s by creator Martin Wagner. It dealt with the lives of four college students, rendered as anthropomorphic animals, and was inspired by Wagner's own college experiences.

The series began in 1987 as a comic strip in The Daily Texan, the student newspaper at The University of Texas at Austin. Each installment was typically four panels with a comedic gag at the end, but with ongoing storylines.

Heavily influenced by Cerebus, Hepcats continued as a comic book series and was reasonably popular in the 1990's, drawing praise for its detailed artwork and complicated story. Wagner and the book became plagued with production and personal problems, including late issues and the breakup of his marriage to an exotic dancer. He published Hepcats under his Double Diamond Press imprint until issue #12, when he switched to Antarctic Press to reprint the whole series with a promised continuation of the story. A color "#0" issue was released to launch this reprint series, but new material for issue #13 never materialized and the series was cancelled.

In a 1999 interview in Beau Yarbrough's Comics Wire, he stated that the "pitiful" advance orders for that issue had led him to look for another way to make a living. He had begun working on public cable-access shows in Texas.

In 2006, Wagner announced that he would finish the Hepcats' Snowblind story arc as a webcomic. The first page appeared on April 24, 2006 and the comic was being web-published at a rate of three pages per week with (as of 2017 March 10) the latest being uploaded in 2007 November.