Henry's Cat is an animated children's television program, written by Stan Hayward and produced by Bob Godfrey, who was also the producer of Roobarb, a similar cartoon series from the 1970s. The show starred a laid-back, ponderous yellow cat, known only as Henry's Cat, and his many friends and enemies.

Henry's Cat was first screened in 1982 and five series were made in total; the series has enjoyed repeated showings since. It developed a cult following and is still very popular along with shows such as Bod, Button Moon, Pigeon Street, The Flumps and Mr Benn. 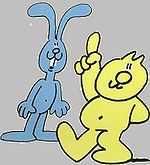 Henry himself never appeared on screen; the name was an allusion to an earlier one-off Hayward/Godfrey collaboration, Henry 9 To 5 about a bowler-hatted commuter who escaped his boring everyday life by indulging in daydreams, mostly of a sexual nature. Henry's Cat shared the earlier character's tendency toward wild flights of fancy and laid-back approach to life. The name "Henry's Cat" was mostly an in-joke for those few people who remembered the earlier cartoon and did not mean that Henry's Cat had a "master", unseen or otherwise.