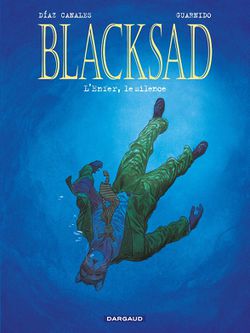 Hell, Silence (the rough English translation of L'Enfer, Le silence) is the fourth comic album in the Blacksad series by Juan Díaz Canales (writer) and Juanjo Guarnido (artist). It was released to French-speaking markets on September 17, 2010, the most recent release since Red Soul in 2005.

The album is set in 1950's New Orleans during Mardi Gras, where Blacksad is introduced by Weekly to a jazz music producer named Faust. Faust asks Blacksad to pursue the case of the disappearance of one of his musicians, a pianist named Sebastian. Sebastian has not been heard from in months, jeopardizing Faust's music label, and Faust, who is suffering from cancer, fears that Sebastian may have gotten mixed up with the drugs trade. Along the way of pursuing the case, Blacksad recognizes that Faust has not told him everything he knows and that Faust may be manipulating him, but decides to pursue the case to the end for the sake of curiosity. He does not know that he will face his most difficult case yet.