The Gals Gone Wild! series is a multiple-part comic book written by TrekkieGal.

It chronicles a single day of 2 heroines. Michelle Flores, a female human, and Candice Greene a hermaphrodite human, and takes place in the 22nd century as they head for a colony named Hedon to work as professional escorts. Unfortunately, they find out that they signed up to participate in an experiment called Project F. The project involves transforming them into a humanoid creature with animal instincts of a specific species.

Michelle is be transformed into Michelle Mink, a female Mink. While Candice becomes Candice Vixen Herm Vixen. They would find themselves on a strange world known as Feralus. There they would interact with others like them, as well as clients that became feral of their free will to experience "true yiff".

There are also humans on Feralus. They are Dairy Hunters who force both characters to breed to cause them to lactate for milking. This situation was brought about due to a worldwide extinction of diary cows on Earth. Hunters also find those suitable to become a pet for clients. There are several large cities on Feralus, all owned by the Hedon Corporate. 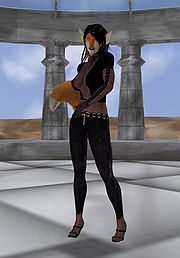 Candice Vixen is a herm vixen in the series. She also is a regular in the Yiffstar chatroom MUCK. Her character is open to interaction with many species, and is artist TrekkieGal's personal character. In the Gals Gone Wild series, she is originally a human herm named Candice Greene. Candee Vixen is the anthropomorphic animals variation of the same character. Although the appear the same, they are two totally different characters. 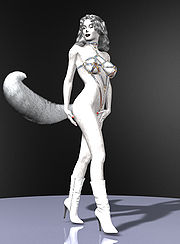 Michelle Mink, also known as Michelle Flores, is a character in the series. Originally a human female, during the project F experiment she is transformed into a humanoid mink. On Feralus, she spends most her time with Candice Vixen, as well as a Pet to various masters. Her strong attraction to Candice Vixen though finds her always escaping, and searching for her. Her character is less submissive and trusting, although she builds an early friendship with Penelope Roma, and Yvette Onyx. Her true furry persona is Mickey Minx who appears at Yiffstar.

A somewhat vivacious character who seeks out Yiffy at any cost. In Chapter 3 she tries to become an interest of Michelle Mink until Candice Vixen appeared. Her character likes mischievous, and bisexual in nature. She is an female humanoid Skunk, and share the same properties as a skunk, yet having the opposite effect on any predators. Rather her odor defending her, they attract them.

A Herm Black Panther that has been on Feralus a number of years. She is elusive as she first appears in Chapter 4 pregnant. She has been breeding on Feralus freely for the past 3 years we find out. She has no steady mate, but the hunters spend a lot of time hunting her offspring. She is finally domesticated and made into a pet.

A human male that frequently comes to Feralus and hunt the furry females, and herms for breeding, lactating, and capture. His character is actually minor, but is seen throughout the series.

Candice, and Michelle approaching the Domed Colony of Hedon

Hedon is a colony located on a small planetoid in the asteroid belt. In the Gals Gone Wild comics. Candice Greene, and Michelle Flores were heading there for the job of their life, only to become an experiment for some Furry experiment, that would send them to Feralus,

Feralus is a fictitious small Planetoid somewhere in our solar system. Candice Vixen, and Michelle Mink were deposited there as part of Project F. The planet is inhabited by Human, and Furry alike. Although it has far more Furries, the female, and Herm are often taken to breed, and then to milking. They are also sought after to become a Pet. It is said no Furry has never left Feralus

Candice Greene, and Michelle Flores go to Hedon to begin their new life as Escorts. They also sign up for the Project F experiment not knowing what in entails. They go through a process where they are transformed into a humanoid creature with animal instincts of a specific species.

Candice Vixen is introduced, as she finds herself in a forest confused, and wondering where she is. Dhe meets a male fox that pursues her because she is in heat. Watching from a distance is Penelope Roma who looks on with longing, and lust.

Michelle Mink and Penelope Roma find themselves tranquilized and bound in a rack in a cellar. They meet the Hunter who has to Capture cats, a male and a herm. He has them forcibly impregnated by the cats to force them to breed. Hunter returns them to where he finds them. There Candice Vixen finds Michelle Minks, and they are reunited for a time.

Yvette Onyx makes her first appearance as a nearly feral Black Panther being chased by Hunter. She is Captured and forced into enduring fetal removal, and lactation. (Mentioned in the series , Hunter capture 3 others we believe are Candice, Michelle, and Penelope.)

Candice finds herself the Pet of 2 female humans. It is here she comes to an revelation that this is the job she was hired for. This is the first appearance of Jesse Hawkins, and Dana Thorn.

All in the works. No set schedule.