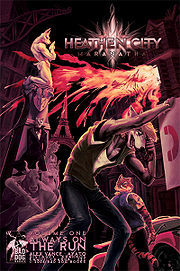 Cover of Volume One of Heathen City. Art by kamui.

Owen Zelazny, a hustler who has decided to quit his life of prostitution, finds himself unintentionally entangled in what appears to be a criminal, political conspiracy. With his new lover Ruy Ortega in tow, Owen seeks out an old friend, Q. I. Malloy, whom he hasn't spoken to in three years. With the threat of pursuers at their heels, the burden of secrets that each of the characters bear, and old flames rekindled, tensions rise as they traverse the globe in a struggle for survival. Action takes place in London, Paris, Shanghai, and the Pacific Ocean.

The world in which Heathen City takes place is nominally identical to the real world as of 2008. Reference is made to the Hurricane Katrina disaster in New Orleans, U.S. President Bush, and notable cosmopolitan cities. There are explicit differences, geographic and social. While all characters are anthropomorphic animals, there seems to be little relation between their ethnicity and their species (the antagonist Caulfield and his mother are cougars, despite being of English descent). At a bar in Shanghai the character Ruy remarks that there are no Asians present, indicating scent plays a substantial role in recognizing geographic origin. The most substantial difference between the Heathen City universe and ours is the existence of Maranatha City, ostensibly located in Florida, on the fictional Blood Bay Peninsula.

Promotion for the upcoming release began in early October 2007, when FurNation and FurPlanet showed their support by posting the promotional posters on their front pages, causing the hit counter on the Heathen City a 2000 hit spike in 48 hours. After vocal support from Wookiee, artists such as Artdecade, Decaf, and K-9 showed their support by contributing fan art of some of the characters, which attracted even more attention.

At Further Confusion 2008, FurPlanet sold booklets of promotional artwork, and gave away complimentary HC-branded condoms. A deck of playing card decks was released in tandem with Volume 1 at Anthrocon 2008, featuring art by Graywolf, Vahnfox, Charha, Fel, TheRGHU, SilverFenrir, MINE CHAOS and Fabercastel.

On May 18, 2008, it was announced on the Heathen City mailing list that Volume One would be released on June 26, 2008, where FurPlanet would sell copies from their tables at Anthrocon 2008. As of October 2008, it is available for order from FurPlanet, Yiffing.com and United Publications. Volume One sold out of all available copies at Anthrocon 2008. It was also a sell-out hit at Eurofurence 14 in 2008, and was available at RainFurrest 2008.

Volume 2 was released in July 2009 at Anthrocon 2009[1] and was available for discounted pre-order from FurPlanet. Alex Vance remains the writer, with Krahnos, ZooShaman, Vahnfox and Blue_Panther each illustrating one of the four stories that comprise this issue, with supporting coloring work from Fel and Charha, a cover by Kajito and additional illustrations by West and Dajan.