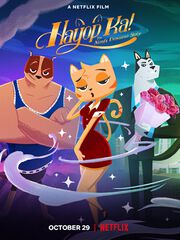 Hayop Ka! (lit. 'You Are an Animal!', a profanity meaning "you son of a bitch!" in English), also known as Hayop Ka! (You Son of a Bitch!), Hayop Ka! The Nimfa Dimaano Story, and You Animal!, is a Philippine adult animated romantic comedy film directed by Avid Liongoren. It features a voice cast that includes by Angelica Panganiban, Robin Padilla, and Sam Milby.

Produced by Rocketsheep Studio and Spring Films, the film was released on October 29, 2020 on Netflix in select territories.

Hayop Ka! takes place in Metro Manila. Nimfa Dimaano, an anthropomorphic feline perfume saleswoman works in a department store and lives with her boyfriend, Roger a mongrel who works as a janitor. However, an encounter with Iñigo Villanueva, a high profile entrepreneur Siberian husky, results in Nimfa being caught up in a love triangle.