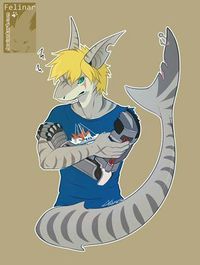 Hatred, as drawn by Felinar.

Hatred is a furry fan and former Furry Amino curator who lives in the United States.[1]

Hatred became a curator of Furry Amino on September 5, 2016.[2] He announced that he was retiring from the curator position on April 9, 2017, due to fears of his own temper and violence.[3]

Hatred's fursona is a tiger shark with blond hair and blue eyes. He has a scar under his left eye, a mechanical replacement for his left arm and a fish hook through his caudal fin. Hatred stands at 5' 10" tall and weighs 134 lbs.[4]