Harvest (Sindi Ursulus) is a character in Extinctioners, and made her first appearance in issue 15. 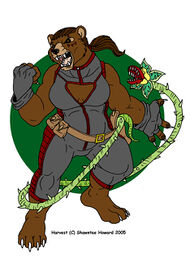 To say that Harvest grew up rich and spoiled would be an understatement. The daughter of a government dictator, Harvest has been used to getting her way with people. That is except from her father, who keeps his precious flower under very tight reigns.

She was kidnapped and now works for her captors. Weither this is willingly or against her will is hard to say, one would think that she'd want to do what ever possible to get free, but instead, she found it the perfect opportuntiy to get back at her over 'bearing' parent.

Harvest controls living plant life and can cause plants to instantly grow and animate by thought. The pouches she wears contains various plant seeds she can use as weapons by instantly causing them to grow