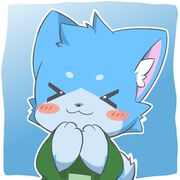 In 2016, he discovered the furry fandom through a friend of his when having a conversation on Discord. In 2019, he joined and became an active member of it.

Haruyuki's fursona species is a dog (Akita Inu). His body and tail are colored two shades of blue. His facial features contain green eyes and a black nose. He typically wears a Japanese green yukata.