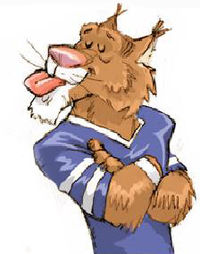 Harry2110, also known as Sean Krams on second Life, is a furry fan who lives in New Albany, Indiana, USA.[1]

Harry2110 can often be seen prowling on online forums, or playing with other furries on Second Life. He is planning to either make or buy a fursuit later on in life. He also has a Myfursona page and is on the IFPL.

Harry2110's fursona is an anthropomorphic Canadian Lynx He spends his free time playing tennis or fishing in the nearby Ohio River. His favorite NCAA basketball team is the UK wildcats; also he is the admin for the UK wildcats group on steam. His favorite shows include Doctor Who and House.

Some of Harry's favorite things to do are photography and IT work. Right now he has an A+ technical certification. He also plays on Counter Strike Source and DOD source on steam SteamID=<UK>=Harry2110.

Harry2110 is also very involved in video games. He play CSS as a member of the ENVY clan that was founded by Roman. He mainly uses Razer products (copperhead, lycosa, destructor). On steam he founded; the video games live group, the furries that use Razer group, comptia, and the UK wildcats group.