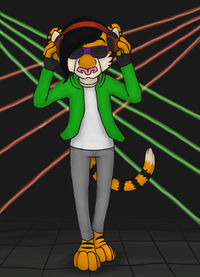 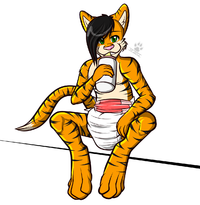 Harley's fursona is a tiger, usually depicted between the ages of two and twenty-one. His build is mostly fox-like. He has a white belly and chest, but is otherwise covered in orange fur with black tiger stripes. He has black hair and green eyes.

Harley has been part of the furry fandom since 2003, previously going by the names Rikuu and Jayden Fascination. Harley attended F3 Convention in 2012.

Harley has worked on music since 2008, and started out making remixes of songs by Nine Inch Nails. Over the years, he has evolved as an Electronic Musician, working in the genres of Dubstep, Electro House, Trance, and some Glitch. His influences include Skrillex, DeadMau5, and Kill the Noise, as well as Renard Queenston.

Harley's music is distributed on his Bandcamp store, under the label Tigerbeats Sounds.