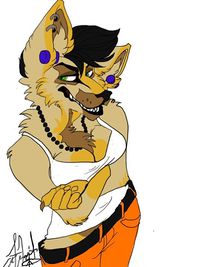 Harley Coyote also known as potatocoyote , is an artist and writer who lives in Boston, Massachusetts, USA.

Harley is an avid fan of the Portal games, and has a weakness for the character GLaDOS (Harley's design concept was based off of GLaDOS's potato battery form). She occasionally wears a white tank top with the Aperture Laboratories logo, and a pair of orange pants, much like the outfit Chell wears in Portal 2.

A Kazzoid, Fluxé is a unique character, and is in fact the last known of his species. He was killed in an electrical storm one night. By chance he was discovered by a female scientist who was able to restore life to him. A special battery-like device was implanted inside of his brain which continues the natural pulses of electricity through his body.

Pink strips of tape are strategically placed on his body to make up for any lost nerve cells and exist to stimulate the flow of electricity. There is a small circle on the back of his skull which is used to recharge the battery in his brain.

Unfortunately, in the process of his restoration, his chest cavity was never sealed, leaving him his organs exposed. This is not harmful to him due to the magnetic properties in his new body which keeps his innards from dying. Fluxé is very clumsy, and knows a bit of broken English. His intestines frequently fall from his open chest cavity which he will scoop up and place back into himself.

Due to his unfortunate demise, Voratio lives with a torso composed only of skeleton, where his spinal column and rib cage are visible. The only organ left in the shell of his body is his brain, which overflows with creativity and genius. He is very clever, but hardly ever speaks.

Corosasaurs are scavengers and never stay in one place. Due to their unusual diet, they must move quite a lot, hanging around scrapyards or any areas with a surplus of metals. They typically don’t stay in large groups due to the scarcity of their meals, and will stay in a pack of either 4 or 5.

Corosasaurs skin is rough and a little scaly with a thin fur cover. Their large bat-like ears are used to listen for predators. Females have the unique ability to change their skin colour to match their surroundings. They are very clever and stealthy compared to the males because of their occasional appetite for meat. When a female is pregnant, her metabolism adjusts to a diet of meat in order to help her child develop properly.

Male corosasaurs have longer more prominent manes and are equipped with a pair of long horns, typically a foot long in length which they will use to fight off predators along with their large feet giving them a powerful kick.