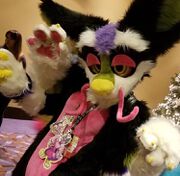 Haphizard is an artist and character designer who lives in the Bay Area, best known for her Instagram account (Haphizard). She originally lived in Southern California, and moved to Missouri in her mid-teen years. She moved back to California in 2017. [1] Her main fursona is a pink and white sodadog with a pink straw and long blonde hair, named Kat

Kat is a female pink and white Sodadog with long blonde hair, based off of Sparkling Grapefruit Ice. Kat is described by Haphizard to be lazy, constantly tired, and a tomboy. She is Haphizard's main fursona and is very often drawn. Haphizard owns a bodysuit of Kat, made by ItsProbablyMars but heavily refurbished by Frouzon (both located on Instagram.) Kat currently has two fursuit heads. One by Serieswvsk (Instagram) and one by Normanpatchesnfurs (Instagram).

Haphazard was Haphizard’s first character. Haphazard's current design is a male multicolored fennec fox/Chinese dragon hybrid. He is described by Haphizard to be a mascot rather than a fursona. Haphazard is mostly black with pink, purple, white, and green parts, along with green and purple eyes. He has three pairs of legs and large ears. Haphazard has gone through three redesigns through Haphizard's time, obviously inspiring her username on many platforms. She created the original version of this character for five years ago on her deviantART.

Sodadogs and sodacats are two semi-open species created by Haphizard. Instead of fur, their tails are made of liquid, and they can both be anthro or feral. Their reference sheet and additional information can be found through “#sodadogsinfo” on Instagram.