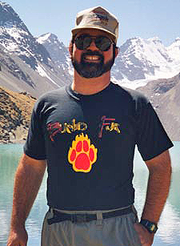 Hangdog, also known as Corndog and Mobile Suit Goddamn (real name Peter Schorn), is an former Greymuzzle furry fan, and one of the five founding members of the Burned Furs movement who lives in Washington, D.C., USA.

He was also (at the time of his involvement with the furry fandom) a member of the Society for Creative Anachronism. He has also been a user/contributor for the Portal of Evil's forums for almost a decade (under the alias Mobile Suit Goddamn.)

Peter Schorn was a frequent contributor the Yerf newsgroups until he was banned after threatening Eric Blumrich with physical harm during a post-September 11 attacks (911) political discussion flamewar.[1][2]