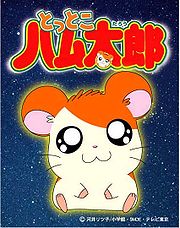 Hamtaro is a cutesy anime from Japan that may have been ignored in favor of popular (albeit allegedly cliched) animes like Dragon Ball Z and Mobile Suit Gundam.

During Hamtaro's success in Japan, Mini Moni made a group for Hamtaro's films called MiniHamuzu (Mini Hams). The series came to Poland as Hamtaro – wielkie przygody małych chomików, then in Italy as Hamtaro, Piccoli Criceti Grande Avventure and then VIZ Media picked up Hamtaro for the US and made its debut on Cartoon Network's Toonami on June 3rd, 2002.

5th-grader Laura Haruna owns a hamster, and his name is Hamtaro. After moving into a new town, Hamtaro finds that he's in the company of lots of different hamsters, making up a group of hamster friends that go on crazy adventures through the city. Before they save Laura and other humans from nasty predicaments, however, they have to learn how to save themselves.