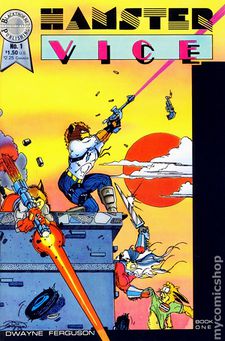 Hamster Vice is a comic book series by Dwayne Ferguson. The first issue, of fourteen, was published around 1984, when Dwayne Ferguson (born 1965) was aged 19 and a "Rutgers University sophomore".[1]

The first series was published by Blackthorne Publishing and appeared in June 1986. It ran for nine issues with two 3-D specials and an appearance in Blackthorne's Laffin' Gas #4 in December 1986. The comic moved to Eternity Comics (a division of Malibu Comics) in April 1989 for its second volume which lasted two issues.