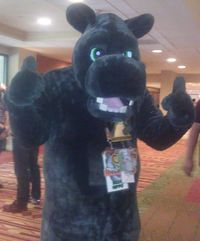 Hammond joined the furry fandom in mid-2006. He is a member of the Nebraska furry regional group, and attends furmeets.

Hammond also has two alternate wolf fursonas, named Deacon and 49er. Deacon is gray/white with a lime green mohawk, goatee, and tail tip. His eyes are heterochromatic, with a blue left eye and green right eye. 49er is red, gold, black and white, and was created as an homage to his favorite National Football League football team, the San Francisco 49ers.

Hammond's fursuit was built by Beastcub,[1] and debuted on May 18, 2013, at the Furbraska's meet. A suit for Deacon is currently in progress.