Hali, also known as Avian Invasion and Hali of Firpine (real name: Matthew Ebel), is a furry who is a professional musician. He's been musical guest at multiple conventions and was Guest of Honor at Furry Weekend Atlanta 2009, Further Confusion 2012, and Feral! 2016. Hali is known for having been an early pioneer of streaming performances online and allowing fans to provide direct patronage to artists—having set up "The Officer's Club" in 2008, five years prior to the launch of Patreon.[1][2]

Hali's musical output includes furry songs such as Coyote All Night, In the MUCK, A Cautionary Tail, and The Ballad of Jamey and Shawn.

Growing up in Washington State, Hali began playing piano at the age of five, and started performing at recitals at the age of six. With twenty years of lessons and a BA in music (emphasis in composition) from Whitworth College, Hali gained the skills to hold his own in any musical environment, and to know how to communicate musically with anyone. “I’ve been able to notice from playing with session players who has really studied music,” he says. “There’s something about the way people play when they’ve studied, and are technically skilled in improvisation.”

Getting his start as a touring artist in the contemporary Christian music scene in the late 90’s, Hali packed up a U-Haul and moved to Nashville with the intention of becoming big in that genre. “That’s why I moved to Nashville, but I quickly realized it wasn’t for me,” Hali says. He follows with a smile, “For the rest of my life I’d have to write about the same subject, and there’s no way I could have done that, no matter how much I love God.” Hali's five years in Nashville strongly influenced his arrangement and writing style. His albums saw Hali evolve from a more traditional piano-based singer/songwriter in the realm of Billy Joel or Elton John into something more uniquely his own. And slightly twisted, in the best possible sense. Jettisoning some of his more organic sounds on Goodbye Planet Earth and incorporating loops, synthesizers, beats and more, Hali found that the new sounds matched his tales of outer space adventure and odyssey.

After Nashville, Hali moved to the Boston area.[when?] In 2011, he added his first regular band member, Runtt, as backup drummer and vocalist.

Starting in 2017, Hali moved to Seattle and began to shift away from primarily producing indie rock music in favour of creating progressive house under the alias "Avian Invasion". He cited the change to growing bored with the genre and a shrinking audience, and found that experimenting with something new re-energised his interest in performing music.[2][3] This new persona was revealed publicly at Furry Fiesta 2018.

Hali formerly hosted and produced the High Orbit Podcast, a space-themed music and news podcast in which Captain Ebel, along with various robot companions, travelled through space aboard the UTF Revolution on the run from the Supreme Empress.[4]

The podcast has since been discontinued, but two musical specials were released as albums. 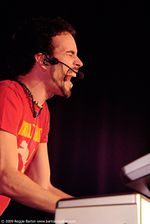 WikiFur News has a related story:
Moonstalker, Hali selected as guests of honor at FWA 2009