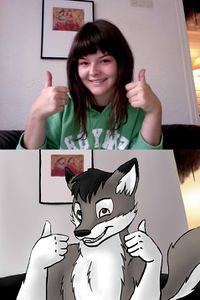 Haku, also known as Hakuwolf, is a female anthro artist.

Haku has officially been in the furry fandom since October 23, 2010. She had been drawing since she could hold a pencil, but had previously never explored the genre of anthro art. After her entry into the fandom, she mainly drew wolves, as she had decided that would be her character species.

Besides making artwork, Haku also enjoys fursuiting in her self-made fursuit. She has attended Eurofurence 17 (August, 2011) and ConFuzzled 5 (May, 2012). Despite being open for commissions, at both conventions she was not in the dealers den, because she preferred to attend the various organised events.