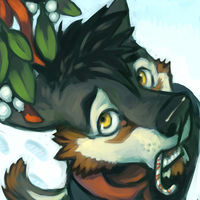 Hakawne (born 1988 in Texas), also occasionally known as Hakawne Amos, is a furry living in Texas, U.S.A. His fursona is a Wollimute, a hybrid of wolf, rough collie, and Alaskan malamute. While the term was an attempt to combine the three animals' names, this hybrid does exist, though it is commonly and simply referred to as a wolf dog.

Hakawne practices parkour as a hobby and is on his way to becoming a firefighter.