Martin Evans (aka Coelacanth) is a furry short-story writer. He has also founded several cyber-wrestling feds of both furry and non-furry persuasions, the most well known being the Furry Fight Farm, which was the mother of all furry cyber-wrestling feds. He also has interests in cryptozoology, Pow-wow (folk magic),and the Cthulu Mythos.

Coelacanth is currently retired and resides in a nursing home in Las Vegas, Nevada.

Coelacanth has written a handful of shorts, mostly about his best-known character Haggis and the Furry Fight Farm, but his liturgy also includes a few fanfics of the survival-horror novel World War Z. A few shorts even mixed the two topics. 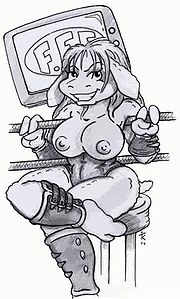 The Mighty Haggis aka The Ewe of Destruction (Real Name Wilma Wilberforce) is the brain-child of Coelacanth. She is a full-figured middle-aged ewe (female sheep) who has a career as a professional wrestler and is a practitioner of folk magic. Her best known gimmick was wrestling topless, because in her early career, unskilled wrestlers would rip off her top to distract her and get in a cheap win. She got her ring name from her fellow wrestling school students and teachers who told her that they were going to make 'haggis' out of her. While on the road, Haggis has encountered ghosts, witches, cryptids, and other phenomena. Haggis has a particular distaste for werewolves.