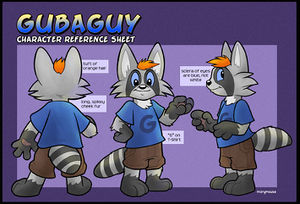 Gubaguy has been a furry since about 2000. He kept this a secret until accidentally revealing him furriness at school during a Spanish class. He was sketching his character, and when someone asked what he was drawing he spoke before thinking and answered, "Me". He then spent the next hour explaining furries, fursonas, and anthropomorphism.

Midway through 2004, Gubaguy went on an online search for other furs, by searching for some of his own fetishes, including transformation and inflation. The first fellow fur that he found was Kanada, and shortly thereafter he found Stormdragon Blue's website, and then Fur Affinity.

Gubaguy considers himself a sissy babyfur within the furry community. He used to be like Tavi Munk[clarify] in that he was called cute and his response was NAW CUTE!!!', but since then he has accepted being called cute, and now is being called a 'silly coon' which brings out the new response of NAW SIWWY!!!.[clarify][citation needed]

Gubaguy's fursona is a raccoon.

In the early Summer of 2008, Gubaguy began construction on his own custom fursuit. Although still trying to keep his involvement in the furry fandom a secret from everyone, buying $50 in fake fur caused coworkers to ask questions, and he let it slip he was working on a secret project.