Gryphons of the Mist, or GotM is a public forum used for gryphon-related roleplay also known as GRPG. GotM ran the strongest during its prime between the years of 2001 and 2006. The majority of GotM follows rules set in place by a specific GRPG style sub-categorized as GRPG:SE.

The GotM forum allows any species of character to roleplay, but it is preferred that all characters be of gryphon origin. Veteran players in the guild may make outside species feel unwelcome and neglect any roleplay that would otherwise be welcomed in the forum. The players on this forum seem unable to trust any different breed of character besides their own and those that resemble them, i.e. the main leaders - Brute Gryphons.

Due to the fact that the forum is very old and contains moderate pornographic material, most fresh GRPG is done nightly in private conferences with no interruptions. In GRPG, most races of furs are welcomed but, unless they are of gryphon origin, they may not feel welcome.

Their teeth resemble snake fangs but there are more than sixty of them in an adult brute's mouth. Like fangs, they can be hidden inside the recesses of the maw, but they are pushed in/out through the use of a complex hydraulics system inside the beak.

GRPG:SE is a sub-group of GRPG that takes place in a secluded beachside forest setting, created by Gryph and led by the character Gryph Sylvr who is the Alpha-male of the main clan in GRPG:SE. This particular RP revolves around a clan of gryphons known as the Silver Elite, and their struggle to survive against the Hunters who want to kill their breed for their teeth, which creates a very potent cerum used as a base product in many aphrodesiacs.

Knowing this financial gain, a certain select few brute gryphons in the Silver Elite choose to sell theirselves and their lesser kin in order to make profit, seeing as the teeth can grow back in time, and the cerum is in the roots of the teeth, which can be extracted from a living specimen with careful practice. 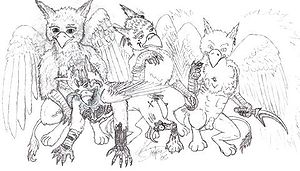 Noteworthy characters of GRPG:SE appear in the above image from left to right as Malvagio, Xarxazeroth, Bane and Gryph

The Silver Elite, or SE is a squad of brute gryphon kin who fight to protect their clan from other tyrants within GRPG.

Most content relating to GRPG:SE takes place in Gryphons of the Mist.