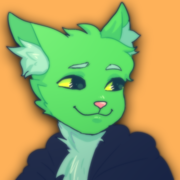 Groovy has also gone by Sarge, and Vagabond before settling on Groovy.

Groovy's fursona has gone through two redesigns since it was created in February 11, 2017 by Alex, and then drawn by aestheti-cfox on the same day, and redrawn by artiadraw going from a orange-yellowish color to a blue. Then finally being made green very recently.[when?]

Groovy made his current YouTube channel on Feb 20, 2015. With the intent to make cartoon reviews. He released a review of Rocket Power on Feb 21, 2015. He didn't release another video until Mar 8, 2017 titled "Furry Webcomics I Love" where he expressed his liking for the webcomics Furry Experience, Furthia High, and Curtailed. He has since released videos inconsistently since.