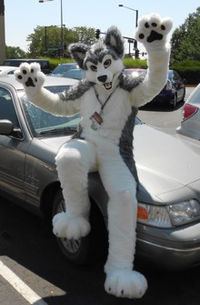 Grizztof Grünwald is a fursuiter from Billings, Montana, U.S.A.

Grizztof's fursona is a grey and white Alaskan Malamute, based on a dog named Grizz he once knew. The name Grizztof is a portmanteau of Kristof and Grizz. Grizztof is a huge fan of hugs.

Grizztof's fursuit was built by Don't Hug Cacti and delivered on August 8, 2012.