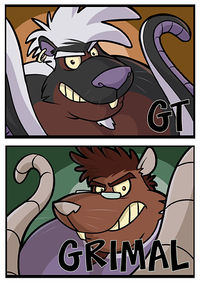 Grimal (also GT Skunkrat) is a cartoonist and illustrator, originally from Mexico, who lives in California, U.S.A. His fursona is a skunk/rat hybrid.

Grimal's other projects include his long-running webcomic, Deo. The print version of the first volume of this comic was self-published and released in October 2007.