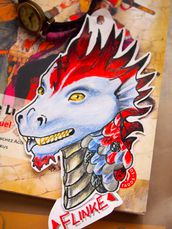 Flinke has got yellow sclera, without iris. Her skin-scales is bluish white, with iridescent areas and two red arrows above her eyebrows and filling her horns, back of her ears, back of her head and her crest. She has got two horns, feathering in her chin, a ridge of spikes from the forehead to the tip of the tail, five-fingered hands, and four legs.

She also has one red ring in the right ear and the middle of the left ear in red. That red area continues through the back of her neck, her back, and her arms. Also, she has got a spiked beard and feathering finished in red.

Her forms of attack are: a blast of icy breath; tail, claws and spikes are used for sea attacks. Her call is a strange, guttural and stentorian wolf roar. She's about 70 years old, so she's a teen in dragon years.

Flinke is friendly, playful and very clever. She loves riddles, better as difficult as possible. Flinke has full command of the Draconic language, but she can also speak and write in English, Norwegian, Scottish, Gaelic, Icelandic, Spanish and only speak some of the Eskimo languages. She plays the violin.

She loves the snow, the mountain an the cold. Flinke is a lover of the icebergs. She loves to dance all types of music, and her crush is Flinch, the 2nd winner of the Fursuit Dance Contest at Anthrocon 2014.