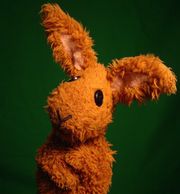 Greg the Bunny is a live-action television series that aired from March through August 2002, and which was released on DVD in 2004. Greg, the title character, is a cast member of a children's show, but when off the set, has more adult and sometimes irreverent interaction with humans.

The show was winner of the 2002 Ursa Major Award for Best Anthropomorphic Dramatic Series.