Laurence "GreenReaper" Parry (born 19 September 1982) is the founder of WikiFur, lead administrator of Inkbunny, and editor-in-chief of Flayrah.

GreenReaper spends much time researching and writing news and articles on furry fandom. He leads furry encyclopedia WikiFur,[2] which he founded in July 2005, and online furry news magazine Flayrah, which he took over in January 2010.[3] He also edits furry articles at Wikipedia and Wikinews,[4][5][6] advises the Anthropomorphic Research Project,[7] and runs the Open Directory's furry and MUCK categories.[8]

GreenReaper was made a moderator for furry art community Inkbunny before its launch,[9] and became its owner and lead administrator in November 2013.[10] He also maintains the Yerf Historical Archive[11] and takes convention photographs[12] – releasing them as free content.[13] 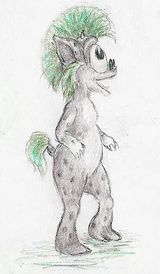 GreenReaper worked in Con Ops at Anthrocon 2007–9 and Furry Connection North '09, but no longer staffs conventions due to conflicts of time and interest. He has attended:

At conventions, GreenReaper is often accompanied by a puppet; historically a raccoon[14] but now more commonly a red panda (Wah)[15] or a ferret (Lindt).[16]

GreenReaper participates in furry multiplayer worlds,[17] including FurryMUCK, Tapestries and SpinDizzy, as a Kai norn, from the Creatures a-life games.[12] 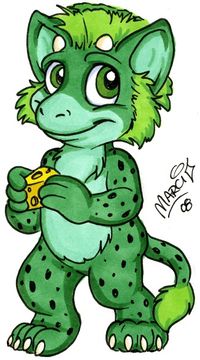 GreenReaper's fursona is a happy-go-lucky explorer who likes cheese and carrots. The norn has a natural affinity for Pokémon, and is sometimes mistaken for a Simisage.

GreenReaper resides in a scale model of Albia on the rim of SpinDizzy, and maintains a shared cave on Isle Timat in the oceans south of Layleaux.

The creature often carries a CrayolaPad, a device resembling an electronic Etch A Sketch which runs LumOS, a berry-themed operating system.

GreenReaper is British, and grew up in Maidstone, Kent and Caterham Hill, Surrey. He graduated from the University of Bath in 2004 with a first in Computer Science, and student awards for being "Most Geeky", "Worst Dressed" and "Most likely to become a serial killer".[18][19] While there, he participated in the juggling club, and acted as a producer for University Radio Bath.

GreenReaper spent almost a decade in the Creatures fan community. His final university project revolved around the game's music,[20] and in 2005 he co-founded the Creatures Wiki.[21][22]

While in Bath, GreenReaper worked for Motorola as part of a bursary; after university he moved to the USA[23] to work as a software developer for Stardock in Plymouth, Michigan, with whom he had a long history as a software skinner,[24] beta tester, support volunteer, and utility coder. In breaks from programming and testing, he founded the Galactic Civilizations Wiki.

In August 2011, GreenReaper began working for GameStop in Irving, Texas after their acquisition of Impulse from Stardock.[25] As of October 2013, he is taking a career break to further develop the websites he maintains, and Metapix, an online gallery management program targeted towards the needs of furry fans. He returned to the UK in August 2014.

In December 2013, GreenReaper mentioned that he "has a different opinion... as to the proper use of pronouns",[26] and might not use the preferred pronouns of some transgender individuals. Discussion with those who considered his opinion to be transphobic revealed instead that, to him, pronouns implied sex, not gender,[27] and using 'he' or 'she' to refer to those who had not undergone sex reassignment surgery could "[convey] an inaccurate fact",[28]. despite typical convention regarding pronouns in the English language.[29]

When pointed out to him that misgendering a transgender person can be a disservice to them[30] and other negative consequences that accompany trans visibility,[31][32][33] GreenReaper responded, "Ultimately your wish to feel safe does not trump my wish to feel honest."

While engaging with those experienced with the impact of such usage on transgender individuals,[34] GreenReaper maintained his wish to avoid "what I believe to be false factual statements",[35] but said he was "willing to make accommodations"[36] by avoiding use of gendered pronouns for those in transition[37] in favour of their name, or the singular they.[28] He also said that, if anything, he identified as female gender-wise.[38]

In March 2014, GreenReaper once again doubled-down on his belief that gender pronouns relate only to sex in an article by [adjective][species],[39] this time also making comments with regards to WikiFur.[clarify] Though WikiFur's policy about pronouns is to use those of the subject of the article, GreenReaper stated, "Consider one practical problem: We have over 10,000 articles about people at WikiFur. We want these articles to be accurate, as far as possible. If you base pronouns on a person’s gender identity, then at any moment an article may need to be rewritten throughout to account for a change in that identity. If you base them on third-party observations of gender, they’re subject to differing opinions as to what is masculine/feminine...."[40]