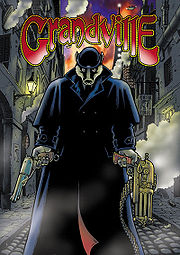 Grandville is a steampunk detective thriller, featuring the character of Detective-Inspector LeBrock of Scotland Yard (a badger). Talbot says he was inspired by 19th century French illustrators J.J. Grandville and Robida; J.J. Grandville was famous for his satirical anthropomorphic illustrations and Robida for his quaint visions of the future.