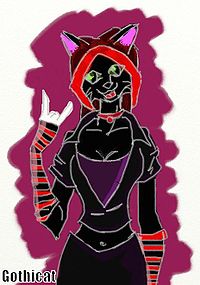 Gothicat is a furry artist who lives in London, England. Her fursona is a black cat with white paws and green eyes. She was primarily a catgirl who was originally a witches cat. When a spell went awry she was transformed into her felis humanus glory. Recently Gothicat has furred over more and known for her wild colours in hair and nonchalant attitude.

Gothicat is a regular at London meets and has recently been seen wearing a partial fursuit built by Phoenix Fyre with a tail by B3 Productions.

Gothicat was recently seen entertaining the masses at RBW by playing music, drawing art and generally messing around in the Gothi-Suit.