From WikiFur, the furry encyclopedia.
(Redirected from Gorilla)
Jump to: navigation, search 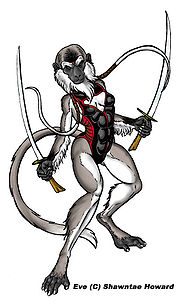 Apes: consists primarily of both humans, chimpanzees, gorillas and orangutans. A few other primates have the word "ape" in their common names, but they are not regarded as true apes by most authorities.