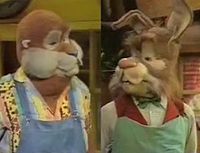 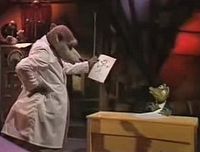 Dr. Wince is not impressed by Sly's artistic talents.

Gophers! is a 1990 television series that featured a variety of anthropomorphic animals who were brought to life through a mixture of full-body animatronic costumes and puppets. The series was screened on the UK's Channel 4, and ran for a single season of thirteeen episodes. A one-off "Making of Gophers!" special was also made.

The titular gophers of the series were the American Gopher family; Chuck and Lillian, their son Junior, and baby Chiplet. Moving into their new home in Sycamore Heights, the Gophers became the neighbours of the Burrows, a family of English rabbits. Arthur Burrows is not thrilled by his loud and brash new neighbours, though his wife Beatrix and daughter Flora (or Florrie) get on with them.

Other characters include Merv (an Australian wombat who squats in a tent in the Gophers' back yard), and a family of Mexican cockroaches who live behind one of the walls in the Gophers' kitchen. The villain of the series was Dr. Wince, a mad-scientist ferret who, along with his toadying reptilian assistant Sly, was endeavouring to recover a magical crystal which was buried in the Gophers' garden.